My best friend and her husband started their own Mardi Gras krewe several years ago, the Krewe de Fu. It’s a martial arts and warrior-themed krewe that rolls on foot on Mardi Gras Day (Fat Tuesday) each year. Their first year was 2009, I joined them in 2010 after I moved to New Orleans, and I recruited Seann after we got together, with his first year being 2013. The Krewe de Fu pulls inspiration from real life martial arts (most members have studied at least one martial art, including Tae Kwon Do, Kung Fu, Tang Soo Do, Ishin Ryu Karate, Akido, or something else), as well as from pop culture, including Bruce Lee, Jackie Chan, Chuck Norris, and even video games, such as Street Fighter. So this year I wanted to pay homage to my favorite childhood video game fighter (me and every other girl of my generation), Chun Li. Seann was up for the idea, and decided to go as Guile, while other krewe member friends chimed in as Cammy, M. Bison, and “evil” Chun Li (the red one). 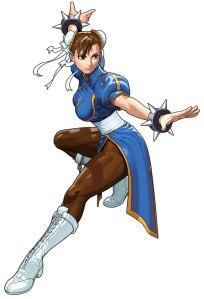 I found a TON of pictures of folks cosplaying Chun Li online. A lot of them were too oversexualized for my taste (and build), and I wanted to stay relatively true to the original game look. Some cosplays I found that I liked were Red-Crane on deviantART, and here on MMOsite. BTW, if you haven’t seen a picture of “Baby Chun Li”, allow me to elicit an “awwwwww” from you: 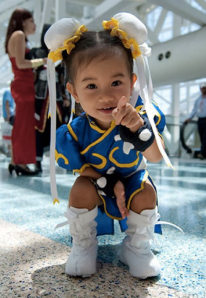 The thing about this one, is… it’s so distinctive that I knew I wouldn’t be able to just FIND a costume that matched, and I’m so NOT a sewing kind of girl, that I needed to go the “easy” but more expensive route of purchasing a costume. The “officially licensed” Chun-Li costumes are SO cheap and horrible-looking (not to mention unnecessarily short) that I couldn’t bear to buy it.

There are a number of sites out there that have available Chun Li costumes (including here, here, and here), many which will do custom sizing. In my estimation, the best one was MicCostumes, which looked to be of good quality, would make the dress based on custom measurements, and included both the white waistband and the hair bun covers. I also liked the length of the dress and the placement and size of the yellow detailing. This order came to $71.58 including shipping (within 20 days). Considering that this was essentially the make-or-break part of the costume, I decided the cost was worth it. Plus this wasn’t intended to be a one-off costume, but an investment outfit I can wear to cons and other events for years.

The shoes were my next consideration. It was key for me to find comfortable boots, given that the primary purpose was marching in a Mardi Gras parade. They needed to be comfy enough to wear all day, which also meant I didn’t want a heel that was too high. I opted for chunkier heels, and a bit of a platform boot, which I also thought looked closer to the character’s boots than some of the others I’ve seen. I found good ones on eBay, similar to these, for $45.99. They worked out GREAT, they came up as high as I wanted them, they fit my wide calves, the laces were nice, and they are comfy. My only problem with them in that they are too baggy in the ankles, but I compensated for this a bit by wearing an extra pair of warm thick socks bunched up around my ankles, which ended up being perfect, since on Mardi Gras Day this year it was literally FREEZING.

For under the dress, partly to keep warm and partly to match the red/brown leg look of Chun Li, I opted for slightly shiny opaque tights in a sort of burgundy color, available here on Amazon for a nicely affordable $5.61 with Prime shipping. I also wanted some undershorts so I wouldn’t be flashing everyone when doing high kicks, and I found the perfect pair of short shorts that matched the Chun Li blue at Sports Authority [no longer available] for $14.97 including shipping.

The final key piece are Chun Li’s iconic spiked wristcuffs. I couldn’t find anything out there that looked right for a reasonable price, so I decided to go the DIY route, fueled by the success of my San costume from Princess Mononoke. I used these instructions on MicCostumes as a basic guide, which worked out great. It was a super cheap way to go and I had fun making them. The supplies (2 black foam sheets, 12×18 inches, 2 coozies, and a can of chrome spray paint) cost a total of $11.39. The real stroke of genius was to use foam can coozies as the base for the wristband – soft enough to slide on & off of my wrist without having to have an opening, but small enough so they wouldn’t fly off when I moved my arms. I cut doughnut-shaped circles from black craft foam, and hot-glued them to the coozies, and spray painted the spikes like in the directions. I also used some spare stuffed animal stuffing I had lying around to bolster the insides of the wristbands so they wouldn’t collapse on themselves. I tried several kinds of glue, but the one that worked best for me was hot glue. Here are some photos of my process (note I couldn’t find black coozies so I used blue, but it wasn’t very noticeable): 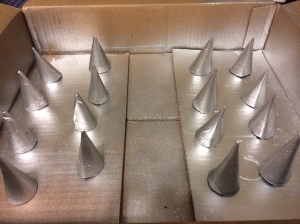 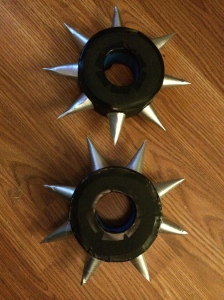 Note: All costs include shipping & tax where applicable. Total Cost for this Costume = $149 (approximate)

Mardi Gras Day was miserable in terms of temperature and all things weather. It was rainy and VERY VERY cold, in the neighborhood of 34 degrees. NOT the day you want to be wearing a short-sleeved dress and tights. Luckily a friend brought some toe warmers, which I shoved in my shoes, and we brought cloaks to cover up a bit, which mostly just got soaked. It wasn’t the best debut day, but I was still VERY happy with how the costume came out. 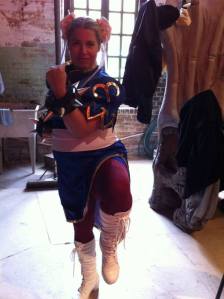 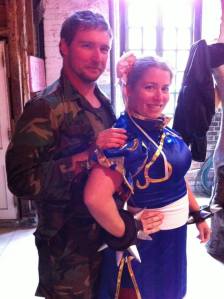 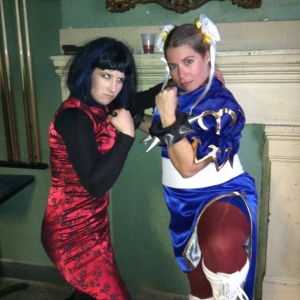 Overall I am SUPER happy with this costume. It was comfortable, immediately recognizable, and high quality so I know it will last. My wrist cuffs got bashed around a bit, and will need some repair work in the places where I didn’t originally use hot glue, and they could use a new paint job, but all-in-all everything worked out better than I expected!